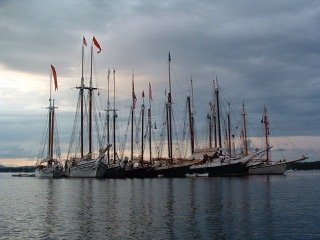 Captain Kip Files owned and operated Victory Chimes, the largest windjammer in Maine, for over 30 years. In this free lecture, Captain Files will discuss his time with Victory Chimes, as well as the historic and commercial importance of the Maine windjammer fleet.

About the Victory Chimes

Built in 1900, Victory Chimes is the last of the 3-masted schooners built in the USA. Launched during the waning age of sail, Victory Chimes represents the pinnacle of what the American cargo schooner fleet became; an amazing story of maritime history and resilience. Featured on the Maine state quarter, Victory Chimes has been operating in Maine since 1954.

Captain Richard “Kip” Files’ traditional sailing career has spanned over 40 years. Born in Bangor, Maine, his love of the water began at age 5 on a family-owned camp at Phillips Lake. In the early 1960s, he discovered the Maine windjammers aboard the family-owned friendship sloop Chance. During his time at University of Maine, he was captain of the sailing team, and over the summer, worked on the Maine-built Bill of Rights.

Captain Files has also taught at Tabor Academy and designed sailing programs for at-risk youth. He was chosen by Mystic Seaport Museum to captain the barque Charles W. Morgan, a 1841 restored Whaling Ship. From Alaska to the Gulf of Mexico, up and down the East Coast, Captain Files has left his mark. Now retired, Captain Files still is active in the maritime community, helping out were he can.

Your ticket for: Lecture: Captain Kip Files & the Maine Windjammers