Arthur Beaumont: Art of the Sea 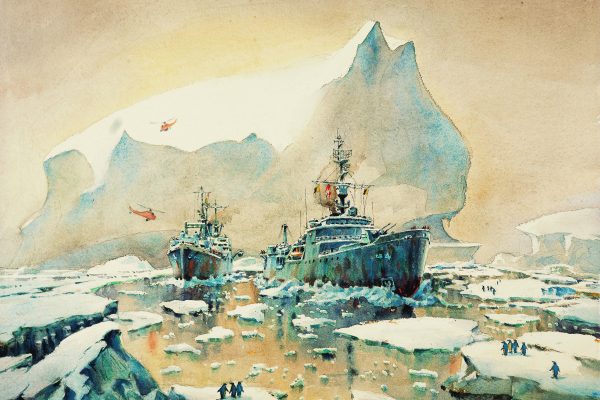 Arthur Beaumont: Art of the Sea celebrates Beaumont’s long career as the US Navy’s Official Artist. These 53 paintings and drawings of mostly US Navy subjects cover his more than 50-year career. Beaumont received his commission as a lieutenant in the United States Navy in 1933 and was appointed as the official artist of the United States Fleet. He served in an official capacity and as a freelance artist for the Navy until his death 45 years later, in 1978. This exhibition is on loan from the Irvine Museum.

Who was Arthur Beaumont?

Arthur Beaumont was something of an enigma. He was an England-born, California-based, cowboy-turned artist. His biography almost strains credulity at some points; his run in with a cattle stealing gang and the subsequent need to both change his name and move to greener pastures comes first to mind. His art, however, is anything but. His powerful portraits of US Navy vessels and officers are bold and entrancing. His colors pull you in and transport you immediately into the sea.

Arthur Beaumont: Art of the Sea is a traveling exhibit organized by the Irvine Museum in California. This exhibition introduces the work of the artist who was awarded one of the Navy’s highest civilian honors, the Meritorious Public Service Medal, for his work supporting and memorializing the Navy.

So – how does an English-born cowboy-artist find his way to a commission in the US Navy as the Official Artist of the United States Fleet?

Born in 1890 on the outskirts of Norwich, England, Arthur Crabbe had art and adventure routinely drilled into him. His father Moses, an officer in the Royal Officer Medical Corps, regaled the five Crabbe children with stories from his postings in India and Egypt. His mother Sarah, a governess prior to her marriage, raised the children on her own while Moses was away. She drew, painted, and sewed in her spare time and must have instilled a love of the arts into her sons, Arthur in particular.

At age 19 Arthur embarked on an adventure of his own. He steamed to Canada where he worked as a ranch hand in Saskatchewan until he earned enough money to join his older brother who had earlier sought opportunity in San Francisco. Arthur enrolled in university and studied art, while working occasionally as a ranch hand to pay for his studies. During one of those stints as a ranch hand he uncovered a cattle stealing ring and became a prime target of those involved.

Partially because of constant threats and attacks, Arthur changed his surname to Beaumont moved to southern California. He eventually left ranching and his other odd jobs and was able to devote himself to art fulltime, with periods of study in both London and Paris. He married and by the 1930s had settled firmly into the Los Angeles art scene. Throughout his education he had made studies and watercolors of harbor scenes. This maritime background helped earn his commission, which propelled his career through World War II and the post-war decades.

While Art of the Sea does not depict any Maine-built ships, it depicts the same espirit de corps that Bath Iron Works’ vessels evoke as they crawl down the Kennebec. It evokes the spirit of exploration, hard work, and awe that the sea inspires in so many of us today; and once drove an English cowboy to travel the world in an attempt to capture.

Register for Exhibition: Arthur Beaumont: Art of the Sea

Your ticket for: Arthur Beaumont: Art of the Sea

Arthur Beaumont: Art of the Sea