From the Archives: Christmas at Sea

December 21, 2018
No comments yet
From the Archives, Historic photos, Maine Maritime Museum

This is Maria Murphy’s description of Christmas at sea on the Bath-built ship Shenandoah in 1896. Her husband, Jim, was the captain. Their 19-year-old daughter, Jane, and 17-year-old son, Wilder, were also aboard; Wilder, who had grown up at sea, was working as third mate. 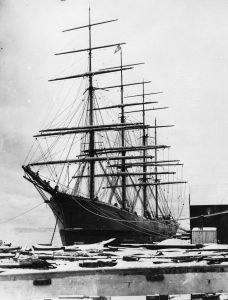 “Christmas day was very fine…I never had a more enjoyable Christmas at sea. We hung up our stockings, or part of us, and were generously remembered. Mine was the best of all, an order for ten pounds to be cashed in Liverpool, besides a ten dollar gold piece from Wilder, some of his first earnings…
I gave Steward a pair of links, and Jane made him a linen picture frame. I made each officer and carpenter a canvas cap. Jane made a candy bag for every body, as we had a quantity given to us, tried to make it pleasant for every body—Jim gave them the day [as a holiday], and they fully appreciated it, by their actions. Jane and I went out on deck to wish them a Merry Christmas, and they gave three cheers for the “Captain and the Ladies.”
In the afternoon, they had some very amusing races. First, two men had one leg of each tied together, then raced with others, tied the same way. Then they had a wheelbarrow race—one fellow took another by the feet and he walked on his hands. Then they raced each with a potato in an iron spoon—only one man got back with his potato in the spoon. Another funny feature was a race where they jumped once over a bench, then crawled under the next one—they got jambed crawling under, in such a funny way, but they were so good natured and happy. After the races, I sent out some oranges.
Jim ordered two turkeys killed, one for the cabin, the other for the men, and they had a fine dinner. We had six turks when we started, besides a lot of young roosters for boiling. After tea the men entertained us with a concert for about an hour, then gave first three cheers for the “captain,” then for the “ladies,” and the last for the “good ship Shenandoah.” They said they had had a splendid time.
…
Today we had for dinner a fine soup, followed by roasted turkey, mashed potatoes, asparagus, green beans, cranberry sauce, mince pie—wasn’t that a good dinner out on the ocean, hundreds of miles from the land?

Your ticket for: From the Archives: Christmas at Sea

From the Archives: Christmas at Sea