Maine Maritime Museum > All Posts > Collection > From the Collection: The Wreck of Hanover and Popular Memory

From the Collection: The Wreck of Hanover and Popular Memory 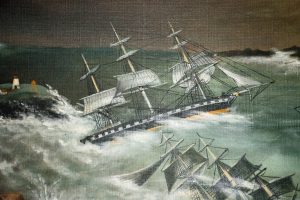 Detail from Wreck of the Hanover, Anonymous Artist, c. 1849

Hanover, a ship constructed by the Houghton Brothers in 1838, struck a sand bar in the mouth of the Kennebec River in 1849. The questionable decision of Captain Rogers to enter the river under stormy conditions led to the vessel’s demise – it broke apart in less than 15 minutes and all hands were lost. Onlookers dispersed souvenir pieces of the ship, as well as the story of its loss, throughout the region. The ship’s cargo carried baskets of Spanish salt; one of the baskets is now on display in Shipwrecks & Salvage.

The moment Hanover broke into pieces and began washing ashore, its history also began to splinter. In a matter of minutes Hanover shifted from a beacon of prosperity and seamanship to a tragedy defined by bad decisions and lost lives. Only those few who either owned or served aboard the ship would remember the vessel as a whole. For others, the ship was only fragments: a broken spar here, a tattered sail there, or a round woven basket tumbling to and fro in the tide. Salvaging the ship became a hunt for souvenirs. Eyewitness accounts of the wreck spread across the local community and morphed into personal tall tales. The hunger for these stories prompted the creation and installation of a moving panorama in Bath’s City Hall that depicted the wreck scene within a month of its sinking. 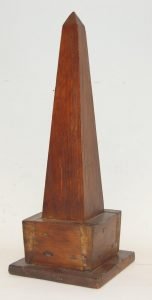 Obelisk made from a door from Hanover

The drama of the tragedy dimmed with the passage of time. But unlike many shipwrecks that slip under the waves unseen and remain inaccessible to salvagers or gossipers, Hanover lived on in popular culture and local souvenir collections. Maine Maritime Museum houses a few of these souvenirs in its collection. One curious object is a 16-inch-tall obelisk fashioned from the wood of a splintered door. What was once a broken and battered piece of Hanover was remade into a monument and relic of a local tragedy. MMM also preserves Hanover’s telescope and, as one would imagine for an object that survived both wreck and waves, it is in poor condition and thus not on display in our galleries. There is a certain element of poetic irony that the telescope, used by a local crew sailing in local waters, survived a shipwreck caused by a well-known, yet overlooked, sand bar. 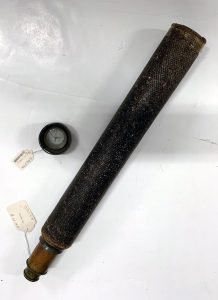 Telescope from the wreck

The shared tragedy of the wreck of Hanover not only shaped local memory, it also influenced popular culture and local literature for years to come. To learn more about the cultural aftermath of Hanover’s loss, join Dr. Susan Beegel for her talk “Harriet Beecher Stowe and the Hanover: The Romance and Reality of a Maine Shipwreck” on Thursday, June 6, at 6 pm. Dr. Beegel will share her research on how Hanover directly inspired literary themes in Stowe’s The Pearl of Orr’s Island.

Your ticket for: From the Collection: The Wreck of Hanover and Popular Memory

From the Collection: The Wreck of Hanover and Popular Memory