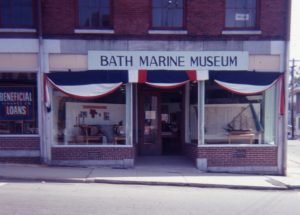 1962 – Seven residents of Bath, Maine, formed the Marine Research Society of Bath, which did business for years as the Bath Marine Museum. In 1975, the name was changed to Maine Maritime Museum.

1985 – The museum added a building on the shipyard campus to house its lobstering exhibit. Also in 1985, a partnership with the Grand Banks Schooner Trust allowed the schooner Sherman Zwicker to be a floating waterfront exhibit at the museum each summer until she was sold in 2014 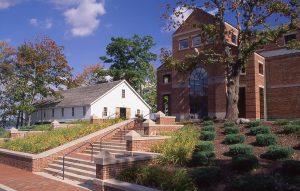 1989 – The museum built its three-story climate-controlled Maritime History Building, adjacent to the Percy & Small Shipyard, allowing all the exhibits, collections storage, research library, gift shop, admissions desk, and administrative functions to be in one location for the first time.

1994 – The museum rebuilt the Deering Pier to provide dockage to larger visiting commercial and private vessels.

1995 – The remains of the clipper ship Snow Squall arrived at the museum, housed in its own building near Deering Pier.

2001 – The museum built an addition to the Maritime History Building, a special event facility called Long Reach Hall. The following year the Visiting Yachtsmen’s Building was added to provide amenities for visitors arriving by boat. 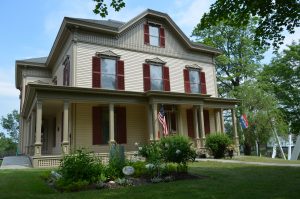 2005 – The museum opened the William T. Donnell house to the public, giving visitors the opportunity to see a shipyard owner’s home as it looked in 1892.

2006 – The evocation of the bow and stern of Wyoming, the largest wooden sailing vessel built in the U.S., was erected where the original vessel was constructed and launched in 1909.

2010 -The museum completed an acquisition of the Portland Harbor Museum (PHM), a smaller maritime museum located in Portland.

2012 – The museum celebrates its 50th anniversary with a major exhibit and catalog of historical collections. 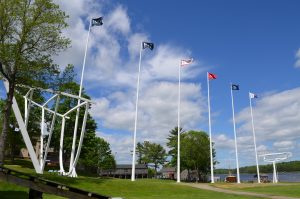 2013 –  The addition of the six metal masts of the Wyoming evocation was completed. The sculpture is 444’ long and the largest in New England. Maine Maritime Museum is named one of the top maritime museums in the world by Marine Insight.

2014 – As a result of a generous bequest,the Kenneth D. Kramer Blacksmith Shop exhibit was constructed on the site of the original Percy & Small blacksmith shop, which was destroyed by fire in 1913. The museum is again named one of the world’s top maritime museums by Destinations Travel magazine.

2015 – After 30 years since its original installation, the Lobstering & the Maine Coast exhibit is completely redesigned to tell the full “trap to table” story of the Maine lobster industry. 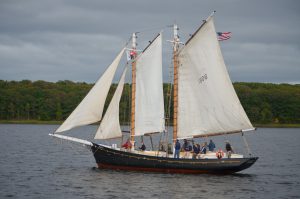 2018 – The newly restored schooner Mary E is relaunched into the Kennebec and spent its first summer in the water as a popular dockside exhibit. A new permanent exhibit, BIW: Building America’s Navy, opened.

Your ticket for: Museum History