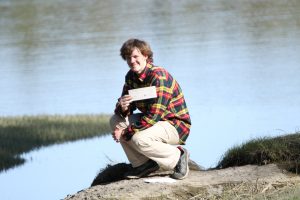 Oscar Hennin poses with the $500 prize.

Maine Maritime Museum has awarded the second annual Nathan R. Lipfert Maritime History Prize to Morse High School junior Oscar Hennin. Hennin was awarded the $500 prize for his outstanding essay, “The Past and Present Use of Dams in Maine.”

“Dams in Maine were my topic of choice because I was originally going to write about brickyards, but I found dams more interesting after reading about them in the ‘History of Woolwich, Maine’ book. There is also a brick dam in the woods near my house (probably from the early 1900’s),” Hennin said. After selecting the winner, the judges were surprised to learn that Hennin is a graduate of Maine Maritime Museum’s Discovery Boatbuilding program.

The Nathan R. Lipfert Maritime History Prize was created to inspire high school students to learn about Maine’s maritime history. The prize honors Curator Emeritus Nathan R. Lipfert (Morse High School class of 1969), and is awarded annually to one Morse High School student for an outstanding essay about maritime history or culture. The essays must be research-based and 1,000 words or less, and may be on a topic of the student’s choice related to Maine’s maritime history or a current maritime issue in the state. Students are encouraged to utilize the museum’s library and collections for research.

There were 27 essays submitted for consideration on topics ranging from conservation and modern industry to historical figures and art. A group of judges conducted a blind review of the essays, ultimately selecting Hennin’s essay “The Past and Present Use of Dams in Maine.” The judges noted that Hennin’s submission stood out for the diversity of its cited sources and its thorough examination of a unique Maine topic. For an Honorable Mention the judges selected Madelyn Jones-Cressey’s essay, “The Royal Tar Inspired Art Movement.”