As we enter week six, seven…eight?…of quarantine, we are all probably suffering from some form of cabin fever. I’m sure you have dusted that same bookcase three times already this week. You are starting to dream about where you will go when we’re all free to travel again. Until that time comes, travel with Maine Maritime Museum from the comfort of your own armchair. Let’s take a closer look at some of the paintings from the MMM collection that are set in destinations that may be on your travel bucket list. 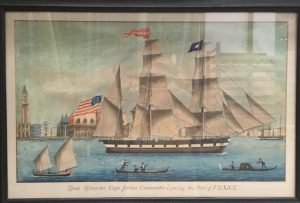 Venice has served as an important port for centuries, once commanding a great merchant fleet and control of Mediterranean trade routes. Over the course of these centuries the city accrued great sums of wealth. Wealthy Venetian citizens poured their money back into their city in the form of grand palaces, elaborately decorated churches, and extensive art collections.

A watercolor from the museum’s collection depicts the Gibraltar (built in Brunswick, Maine, in 1841) leaving the Venetian harbor. The painting’s inscription identifies its patron, Captain Jordan, who likely commissioned this watercolor while in port.

The view from the helm of the ship as he entered the city would have been very similar to the one tourists see arriving by boat today. The famous Piazza San Marco is clearly rendered in the painting’s background with the Campanile (bell tower) on the left, the Doge’s Palace on the right foreground, and the onion-shaped domes of St. Mark’s Basilica seen just behind the palace. Together, the Piazza’s buildings, clearly visible from the harbor, serves to remind all those who approach by water of the city’s wealth and power. 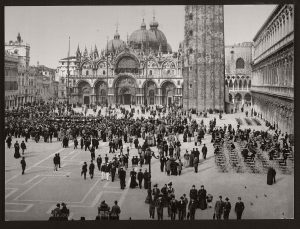 But by the 19th century, Venice’s geo-political status had waned quite a bit from its Renaissance peak. The city was passed around to various conquerors: Austria, then Napoleon, then Austria again, and so on. But one industry continued to grow during this century, tourism. While Captain Jordan was visiting on business, he likely saw throngs of tourists arriving by steamship. Venice was considered an essential stop on the European grand tour by European and American aristocracy. In the foreground of the painting, two dapper gentlemen enjoy a gondola ride as it glides in front of the American ship. Is the one gentlemen gesturing in awe at the three-masted vessel that traveled all the way from America? I’m sure Captain Jordan would love for you to think so. 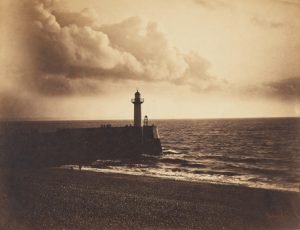 Next we travel to Le Havre, France, a port city in Normandy that doubled as a seaside resort town for Parisians in the late 19th century. Unlike Venice, Le Havre, was a growing port city in the 1800s. American merchants were a common sight in Le Havre, evidenced by the many ship portraits in the MMM collection depicting Le Havre’s harbor. 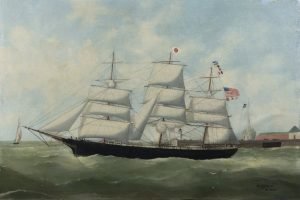 One such painting features the North Star, a Maine-built ship (1871). The artist, Edouard Adam, was the official city marine painter (a testament to his skill and prestige above the average port painter). Adam included his city’s famous maritime landmarks, a round fortification building and a lighthouse both located on the jetty extending beyond the city docks. These landmarks are depicted by so many marine artists that the structures became symbolic of the port they represent. In the painting, the lighthouse can be seen just to the right of the mainmast (or middle mast), and the round building to the right of the mizzen (or right mast). This 1857 photograph depicts the lighthouse that the captain and crew of the North Star viewed upon their approach just a few decades later.

But Adam’s painting tells us little of the port and city itself. The North Star visited Le Havre during France’s Belle Époque period (1870s-1910s), characterized by prosperity, leisure, and cultural innovations. Think Claude Monet and the height of Impressionism. While the port was teeming with merchant business, the city also featured many casinos, resorts, and theaters catering to a growing population of artists and socialites. Unfortunately, this Belle Époque city was flattened by the bombs of WWII. 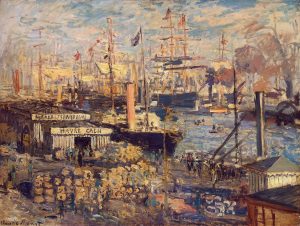 With the 19th century city lost to history, is it possible to know what the North Star crew experienced when they arrived into port? For clues, we can look outside the maritime world. Claude Monet’s The Grand Quay at Le Havre (1874, Hermitage Museum) can help us fill out our imagined journey to the port city 150 years ago. Monet’s squiggles and quick gestures capture the billowing smoke of steamships and the many layered masts of sailing vessels awaiting its cargo and passengers. Look long enough and you can almost begin to hear the hustle and bustle of the busy docks.

I’m hoping by this point you are imagining your armchair as your favorite mode of marine transportation. So board your imaginary steamship, yacht, or clipper ship, and set sail for Japan.

In the 17th century, Europe tried really hard to convert the Japanese to Christianity and engaged in not-always fair trading practices. In response Japan shut its doors to Western trade for two centuries. Japan reopened to the West in 1853 and what followed was a flood of European and American merchants hoping to take advantage of a new market. MMM houses many types of Japanese souvenirs brought back from the East by American sailors: portraits of patrons dressed in kimonos, tea chests, and prints.

MMM’s collection features a print by Utagawa Yoshiiku (1833-1904) depicting an anonymous, and possibly fictional, Japanese harbor. An American ship serves as the central focus of the image. One ship from each of the following nations lingers in the background: France, the Netherlands, Russia, and Britain.

The artist’s attention to detail differs from that of Western ship portraitists but is no less impressive. Rather than render minute details of the ships rigging and sail evident in the paintings above, Yoshiiku focuses on depicting the activity of the American crew and Japanese locals, differentiated by their costume.

Each group of figures creates a small vignette of activity. At the stern of the American ship, a woman in Western dress gazes off at the busy harbor. The massive American flag dwarfs her small figure below serving to further reinforce the grand scale of the American ship compared the other nations’ vessels. Japanese workers in a small tender hold out their hands to catch a bundle of cargo flying in midair. A Japanese man,standing towards the ship’s bow with his back to the viewer, surveys the scene on deck, perhaps overseeing the entire operation of unloading cargo. These small details share one thing in common: they are observations from a Japanese artist witnessing an influx of new cultures and peoples in his homeland.

Yoshiiku, was a Japanese artist known for creating prints featuring people and scenes from popular culture – imagine if your favorite celebrity news website featured drawings rather than photographs. This Japanese tradition, known as Ukiyo-e, flourished as the middle class grew with the expansion of international trade. The MMM print begs the question, why did Yoshiiku deviate from his usual subject matter to depict a maritime scene? One answer: he didn’t. Yoshiiku specialized in popular culture; the arrival of peoples previously unknown to Japan for over two centuries likely dominated the headlines and gossip trains for quite some time. The print represents a time and place where the maritime world and popular culture were one and the same. This print also offers a rare glimpse into another culture’s depiction of ourselves. What do you think Yoshiiku was trying to show to his viewers? A simple harbor scene or a commentary on Western expansion?

And it is here that our armchair tour of the maritime world ends. I thank you for traveling with me through both time and space to experience the cities that were as familiar to 19th-century American merchants as their own hometowns. We look forward to seeing you all again in our galleries soon where you can chart your own world tour.

Your ticket for: Quaran-Things: Armchair Travel