Welcome to Quaran-Things, an up-close look at objects from the museum collection that – in this age of social distancing and work-from-home – we may have a new-found appreciation.

Such as your home coffee maker.

We have all likely adjusted our daily routines, but there is one ritual that this museum staff member holds strong – making the morning coffee.Take a moment and give your caffeinated-beverage maker a nod of appreciation for its extra hard work these days. 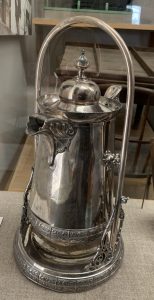 The ewer from the Downeaster, the Benjamin F. Packard, also served the beverage rituals of the ship’s captain by likely serving water and other drinks throughout the day. An up-close look at this ewer, currently on display at MMM, can tell us a lot about the surprisingly lush lifestyle captains lived aboard their ships.

The ewer is a silver-plated vessel with a single handle, hinged spout, and domed top. The ewer is attached at its sides to a metal arch, securing the ewer to a decorative base. The ewer hovers just above the base, allowing the user to simply tip the vessel over to pour out its contents without needing to pick-up the entire object. This is a fairly common design, but one can imagine the advantages of a stable ewer while trying to pour your morning beverage on the high seas. But beyond its function, this ewer stands out for its materials and degree of decoration. Why would a captain, who seemingly shares his cabin with only himself (or perhaps his wife and children) need such an extravagant object for a space as utilitarian as a cargo ship? The answer is for prestige – both personal and public.

Silverplating was a new technology introduced in the mid-19th century that brought “silver” to the masses. This ewer was made by Rogers Smith & Co, a later iteration of the original company that pioneered the silverplating process that allowed manufacturers to adhere a thin layer of silver over a much less expensive base metal. The silver-plated ewer is inscribed with the vessel’s name, Ship B.F. Packard. The ewer’s silver complements the other lush materials found in the captain’s quarters. An 1883 description of the newly launched ship describes the Packard’s captain’s cabin, “The cabin is built for convenience and is a fine one…[it] is composed of french burl, mahogany, rose wood, and birds eye maple and is prettily put together.” The description goes on to describe the Italian marble wash stand with silver railings and the satin plush sofas. The material used to construct and furnish this space reflects the social prestige captains enjoyed in the Age of Sail. 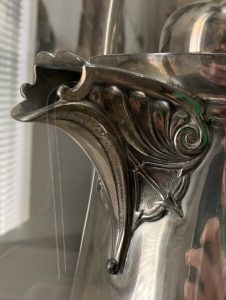 Detail of trident motif on spout

But how can these expensive materials lend social prestige to its captain if no one sees them? Does a falling tree make a sound if no one is there to hear it? The Benjamin F. Packard was a Bath-built Downeaster (1883) constructed by the Goss, Sawyer, and Packard Shipyard to sail regular routes to New York, Baltimore, and San Francisco. While in these ports, captains could entertain clients and guests in their quarters. Imagine how impressed you would be if the captain poured you a refreshing beverage from a gleaming silver pitcher adorned with decorative motifs of flowers and vines, a reflection of the wealth and success of the ship whose name is clearly inscribed (in case you needed reminding). You would also likely not miss the trident motif at the base of the spout – a well-known symbol of Neptune, god of the seas.

It is easy to get lost in the romanticized life of a ship captain and think these men enjoyed luxury for luxury’s sake. Well, yes, or course they did – wouldn’t you? But the captain’s quarters served another important function, it represented not only the captain, but also the ship owners, builders, and investors.
Even the ewer can send a message of success and prestige. 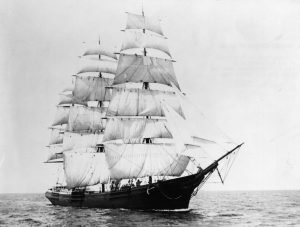 So tomorrow morning, when you wake up and head toward your coffee maker, kettle, or microwave, lift your head high and relish in the morning ritual that brings us all success in getting through the day.

Next up in Quaran-Things? Boredom, then and now.

Your ticket for: Quaran-Things: Silverplated Ewer