The War Next Door: T.W. Hyde and the American Civil War

The lands and people of Maine were hundreds of miles from the cannon blasts and military marches of the American Civil War that tore both earth and families apart between 1861 and 1865. But distance did not dull the pain of losing a family member or the elation of a hard-fought victory. Maine contributed more troops per capita to the Union Army than any other state. Perhaps one of the most famous Mainers is Joshua Lawrence Chamberlain, whose defense of Little Round Top during the July 1863 Battle of Gettysburg helped turn the tide against the Confederate troops.

Bath, Maine, lays claim to its own Civil War hero, Major Thomas Worcester Hyde.  Today, Major Hyde’s post-war success in founding Bath Iron Works and launching a legacy of innovative steel shipbuilding eclipses his history of unyielding leadership on the battlefield. Before Major Hyde returned home to Maine in 1865, Congress and his officers awarded him medals recognizing his bravery in battle. 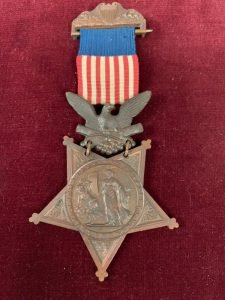 Maine Maritime Museum has two of these medals in its collection. In 1891, Hyde received the Congressional Medal of Honor for his leadership at the Battle of Antietam in September 1862. In this battle, Hyde led the Seventh Maine Volunteers through heavy artillery fire. His troops held their ground until Hyde received a misguided order from the Brigade Commander to initiate a hopeless charge onto a Confederate position among haystacks and farm buildings. Despite the Confederate’s superior position, Hyde’s keen observations and quick decisions, led his men to victory. His men recounted tales of how Major Hyde’s only wound was to his sack of hardtack and how he encouraged morale by saving the colors from falling. 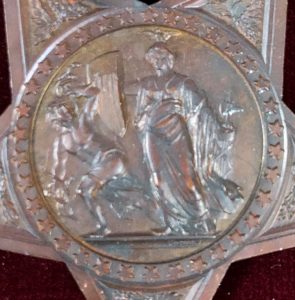 The iconography featured on Hyde’s Medal of Honor directly relates to the ideal conception of Union bravery and superiority over the Confederate states. Those familiar with Medals of Honor may know that each branch of the military has its own unique design.  The design featured on Hyde’s medal was adopted in 1862, the same year as the Battle of Antietam. The Army and Navy used this same design until 1904. Until 1904, the only distinguishing detail between the Army and Navy is whether the eagle is perched on an anchor or cannons. The image in the star’s central roundel features layers of patriotic meaning. A tall and confident Minerva, the Roman goddess of wisdom and here used as a personification of the United States, thrusts her shield featuring the U.S. Coat of Arms into the face of Discord, who holds the Snakes of Secession. In her left hand, Minerva holds a fasces, an ax surrounded by a bundle of rods, a Roman symbol of magisterial power. Major Hyde’s accomplishments on the battlefield that earned him a Medal of Honor can be read as upholding the Union’s vision of eradicating traitorous secession through wisdom and the claim to legitimate law and order. 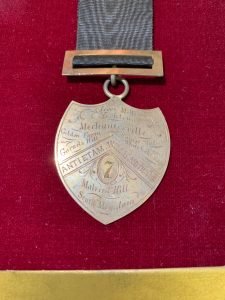 The officers of the Seventh Maine Volunteers awarded the second of Hyde’s medals featured in the museum collection. The fabrication and design of the medal reveals its more humble origins. A simple inscribed medal hung from plain black ribbon lists the battles in which Major Hyde led his men:  Lee’s Mill, Mechanicsville, Golden Farm and Garnets Hill, Savage’s Station, White Oak’s Swamp, Antietam, Williamsburg, Malvern Hill, and South Mountain. There is no grand iconographic program celebrating the triumph of American ideals. Rather, a simple dedication to Hyde on behalf of the officers who directly witnessed and benefited from his strong leadership, “Presented to Major T.W. Hyde by the officers of the 7th ME Vols.”

Maine’s contributions to the American Civil War made its mark on both land and sea. Maine’s well-established shipbuilding industry contributed gunboats and steamers to help run blockades against Confederate war ships looking to expand its territory. To learn more about naval Civil War efforts, join us April 25 for a book talk and signing by Robin Lloyd, the author of Harbor of Spies: A Novel of Historic Havana.

Your ticket for: The War Next Door: T.W. Hyde and the American Civil War

The War Next Door: T.W. Hyde and the American Civil War